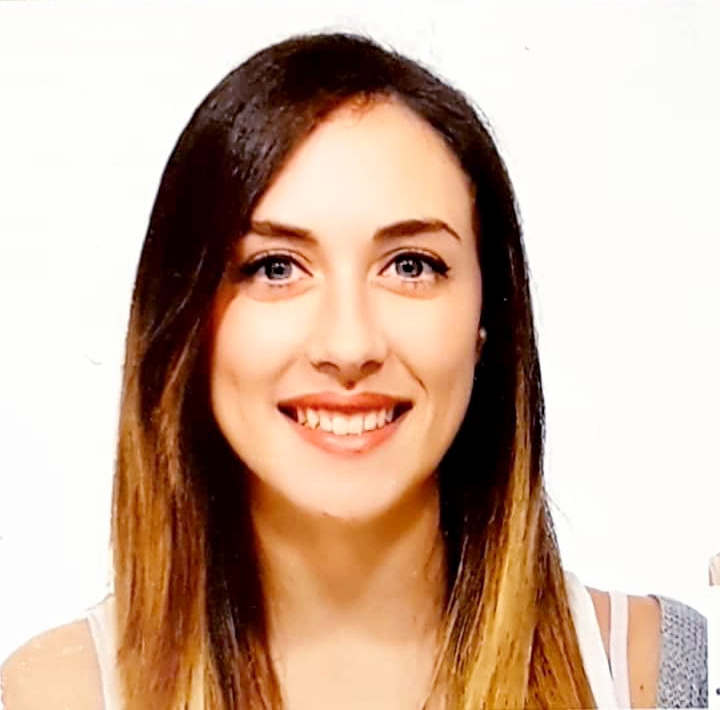 Ludovica Luongo is a chemical engineer, both her bachelor and master’s degree were at Università Degli Studi di Napoli “Federico II”.
During her master thesis, guided by Prof. Sergio Caserta, she worked on a project about chemical and mechanical stimuli on the tumour invasion. The purpose was to study a complex and biological system from an engineering point of view.
After her graduation, she went to the Max Planck Institute of Colloids and Interfaces thanks to an Erasmus plus traineeship scholarship. She investigated, together with Dr Emanuel Shneck, Dr Reinhard Miller and Dr Ernesto Scoppola, about the Characterization of Lipid Oligolayers and other surfactants at Oil/Water Interfaces.
Currently, she’s at the University of Sheffield in the Chemical and Biological department with Dr Annette Taylor and they’re working on the Marie Sklodowska-Curie Early Stage Researcher in Chemical Reaction Networks and Modelling project. 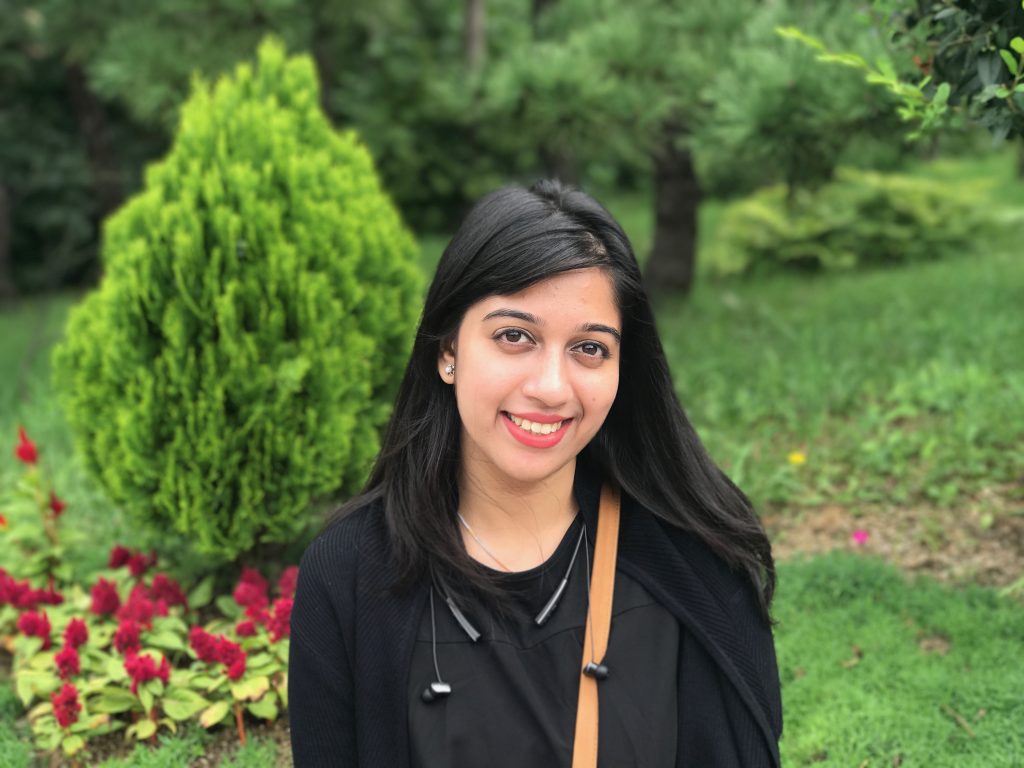 Maheen Rana is a Marie Curie Research Scientist at the Department of Chemical and Biological Engineering, The University of Sheffield, United Kingdom, under the supervision of Dr. Annette Taylor. Maheen, a chemical engineer, has been working as a graduate research engineer in Process Analysis Laboratory (PROCAL) affiliated with Advanced Biomass R&D Center, and did her Master’s in Chemical and Biomolecular Engineering (CBE) from KAIST, Republic of Korea. During her research career, she worked on the project ‘Strategy for the productivity enhancement in the open raceway pond (ORP) for the culture of microalgae’ and implemented the concepts of computational fluid dynamic software (ANSYS CFX 18.0) to numerically simulate the process dynamics. Moreover, she has hands-on experience in cell strain pre-culturing, clean room handling, and design and fabrication of microfluidic devices, which gave her the better understanding and interpretation of experimental findings. Her experience has backed her in gaining technical knowledge interpretation and provided an extrapolation of theoretical concepts into practical aspects of chemical engineering, natural engineering phenomenon, culture mediums, and fluid behaviors.

Maren Weißenfels completed her Bachelor and Master studies in Biomedical Chemistry at the Johannes Gutenberg-Universität in Mainz (Germany). She performed her Bachelor thesis on stimuli-responsive poly (ethylene glycol) derivatives in the group of Prof. Holger Frey in the Department of Macromolecular Chemistry. Subsequently, Maren spent six months in the Pittelkow group at the University of Copenhagen (Denmark) working on the synthesis of heterocyclic helices in the field of Organic and Supramolecular Chemistry. For her Master thesis, she joined the group of Prof. Pol Besenius. There, she designed novel peptide-based building blocks that self-assemble into functional supramolecular polymers in water. Since September 2019, she is a PhD student in the research group of Prof. Rafal Klajn at the Weizmann Institute of Science in Rehovot (Israel). 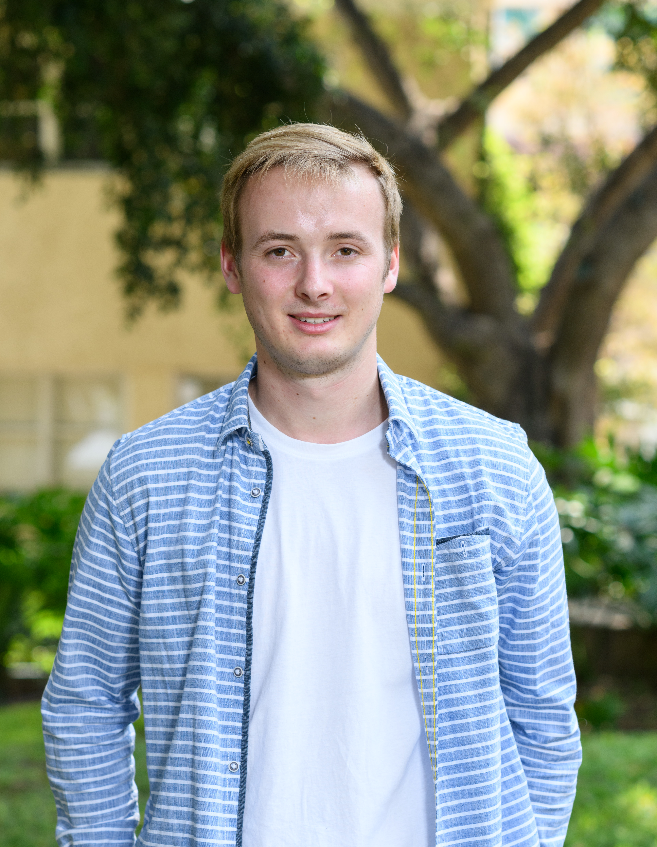 Julius Gemen obtained his Bachelor degree in Biomedical Chemistry from the Johannes Gutenberg University Mainz (Germany) in 2017. After a research stay at the Weizmann Institute of Science he proceeded with his Master studies at JGU Mainz. For his Master thesis, he joined the Max Planck Institute for Polymer Science (Germany) and worked in the field of Life-like Nanosystems and Architectures. Since September 2019, he is a PhD student at the Weizmann Institute of Science (WIS) under supervision of Prof. Rafal Klajn. 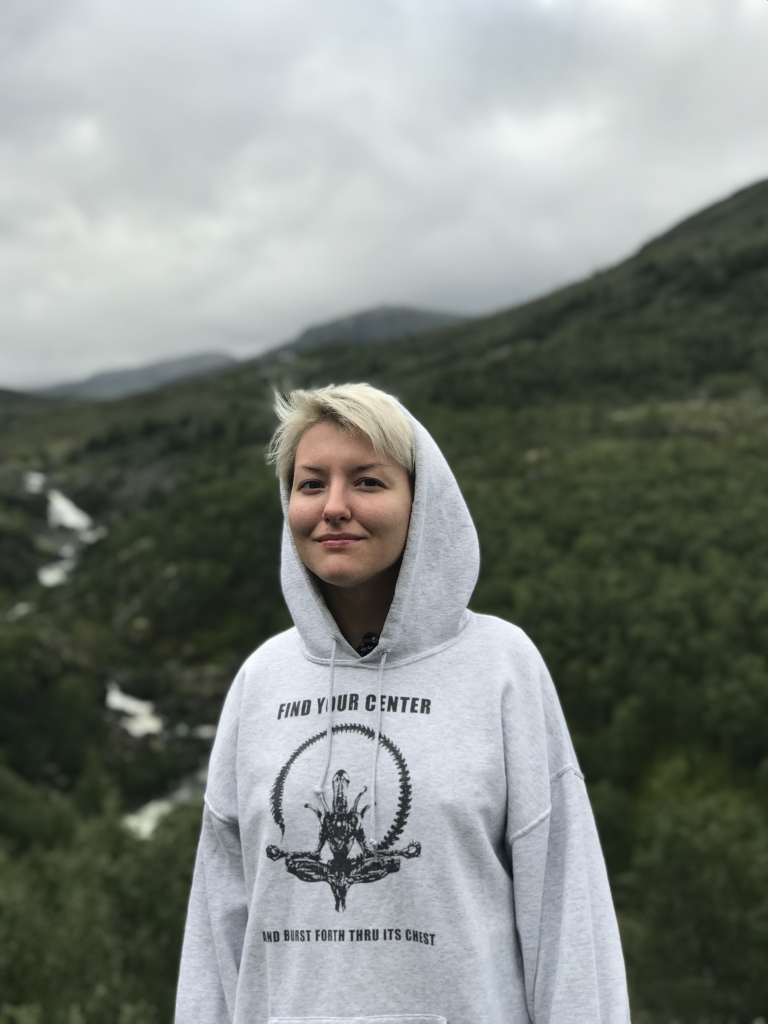 Anastasiia obtained her Bachelor’s degree in Chemistry in 2017 from Taras Shevchenko National University of Kyiv, Ukraine, working on coordination chemistry of Nb, Ta (V) oxyfluorides. In 2019, she received dual Master’s degrees in Inorganic Chemistry from Taras Shevchenko National University of Kyiv and in Physical Chemistry and Materials from the University of Strasbourg, France. Her master thesis was based on synthetizing lanthanide containing polymers and on studying influence of magnetic field on polymer self-assembly. Anastasiia is currently a PhD student at the Institute of Supramolecular Science and Engineering (ISIS), University of Strasbourg, under the supervision of Prof. Thomas Hermans. Her research interests include: life-inspired systems, nonequilibrium self-assembly and supramolecular materials 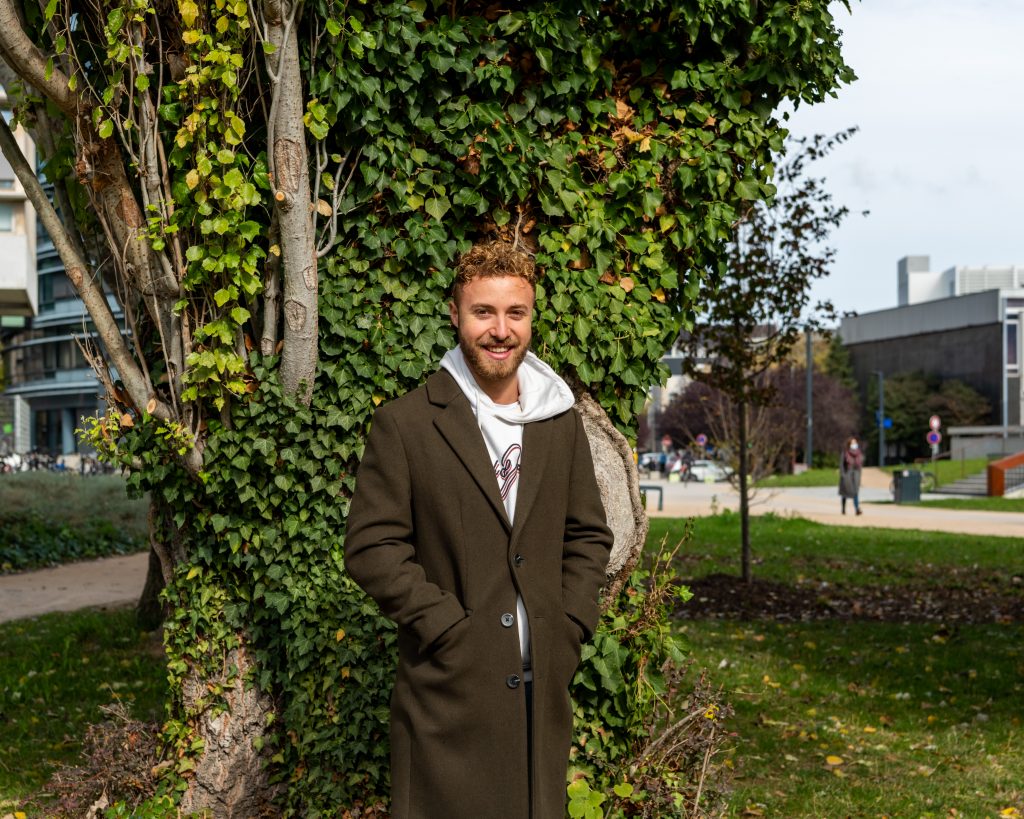 Álvaro graduated with an MChem Hons in Chemistry, Biological and Medicinal Chemistry at the University of York, UK. He wrote his master thesis in Prof. Hermans lab in the University of Strasbourg where he will pursue his PhD in “Overcoming thermodynamic control, by timing self-assembly in a chemically fuelled reaction cycle”.

He was awarded the Laidlaw scholarship for leadership and research under the supervision of Prof. David Smith in the nanomaterials group at York, where he studied a multicomponent self-healing hydrogel and applied it to tissue engineering and cell growth studies (2018-2019).

He started his research career in the York Structural Biological Laboratory (YSBL) under the supervision of Prof. Fred Antson, where he pursued to get a  high-resolution structure in TEM and Cryo-EM of the capsid and portal protein of the herpes virus (2017).

Outside science, he has worked for different HR departments where he specialised in group dynamics, public speaking and recruiting. 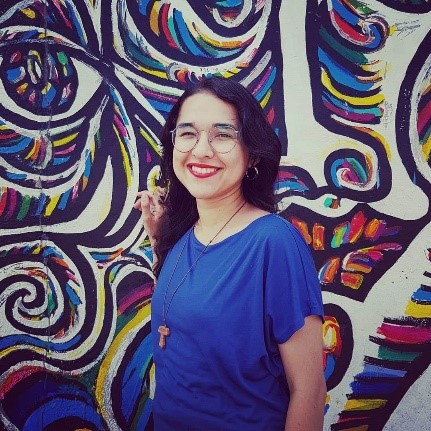 Jacqueline is a Marie Curie Early Stage Researcher at the IBM Zurich Laboratory. She is a member of the ‘Physics of Nanoscale Group’, her project at IBM is carried out under the supervision of Dr. Heiko Wolf. Her Ph.D. degree will be from the Delft University of Technology, advised by Prof. Dr. Jan van Esch.

She pursued her degree in Chemistry (2015) and Industrial Chemistry (2017) at the University of Brasilia (UnB), Brazil. During her undergraduate studies, she has worked in laboratory management in the Ministry of Agriculture, Supply and Livestock (2015) and performed scientific research in the field of nanoparticle synthesis and characterization – UnB(2016-2017), modeling of copolymerizations – UnB (2016), synthesis of organic ligands – Université de Montreal, Canadá (2014) and biofuels – UnB (2011). Also, she took part in a one-year exchange program in France at the Université de Savoie (2013-2014).

Jacqueline acquired an Erasmus Mundus Joint Master degree in Advanced Spectroscopy in Chemistry. She took the first year of the Master program at the University of Lille, France (2017-2018). During summer break, she realized a 3-month internship on nanopore sensing at the Adolphe Merkle Institute, Switzerland (2018). Her second-year of master studies was at the Jagiellonian University in Krakow, Poland (2018-2019). There, on her master thesis, she investigated different aspects of immunoSERS spectroscopy. 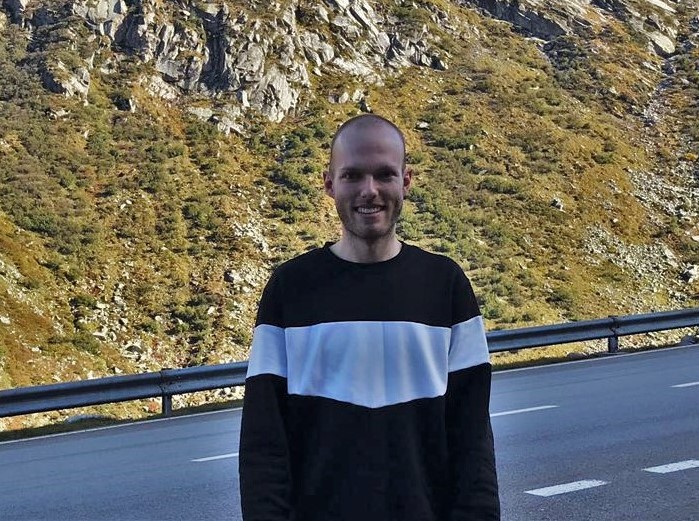 Benjamin Spitzbarth studied chemistry at the Johannes Gutenberg University Mainz (Germany). During his Bachelor thesis in the group of Prof. Pol Besenius he worked on the synthesis of asymmetrically substituted triazines. After obtaining his Bachelor degree, he pursued a six-month internship in the group of Prof. Rein Ulijn (CUNY, New York) developing transient, biocatalytic self-assemblies of naphthalenediimide-based monomers. For his Master thesis, he worked in the group of Prof. Till Opatz on the development and optimization of photoredoxcatalyzed multi component reactions (MCRs). In November 2019 he joined the group of Dr. Rienk Eelkema at the TU Delft (Netherlands) as a PhD student. 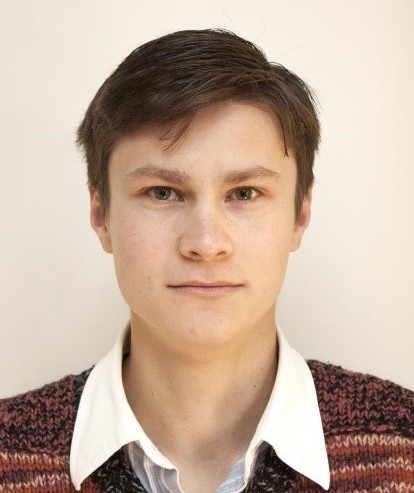 Ruslan Ryskulov was studying at Taras Shevchenko Natonal University of Kyiv, there he has got Bachelor and Master in the field of Optics and Laser Physics of Department of Physics. The 2nd year of his Master study was completed at University of Strasbourg and his Master thesis was related to investigation of HIV-1 at the nuclear periphery using the superresolution microscopy techniques, this work had been done at Laborotory of Bioimaging and Pathologies, he joined to Yves Mely`s group during his internship there.  Since October 2019, Ruslan is a PhD student in the group of Prof. Aldo Jesorka at Chalmers University. 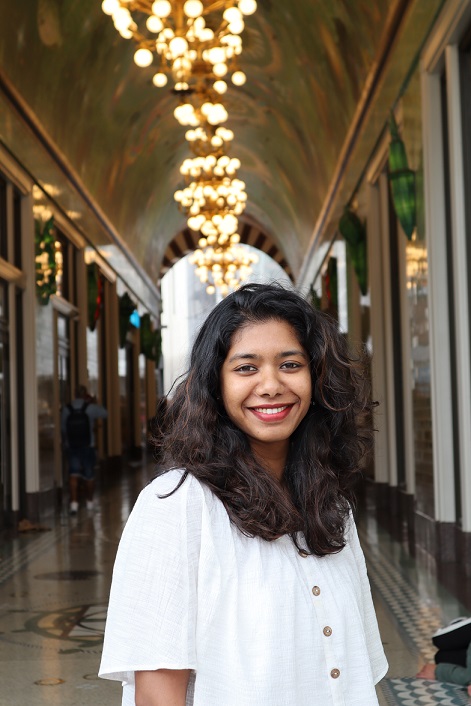 Nisarga received her Bachelors and Masters degree in Mechanical Engineering from Visveswaraya Technological University, India. Her bachelor thesis was on the effect of impact of steel balls on the properties of Titanium alloy, a precursor study of foreign object damage on turbine blades carried out at the Gas Turbine Research Establishment, Bangalore. During her masters she did an industrial internship at SKF and continued to do her master thesis on simulation automation for the stress analysis procedures of HUB bearing units. The finite element concepts were automated using APDL codes in ANSYS Classic. She is currently a Phd student at Elvesys & University of Strasbourg under the supervision of Guilhem Velve Casquillas and Professor Thomas Hermans working on spatiotemporal control over chemical reaction networks using coupled on-chip micro continuously stirred tank reactors. 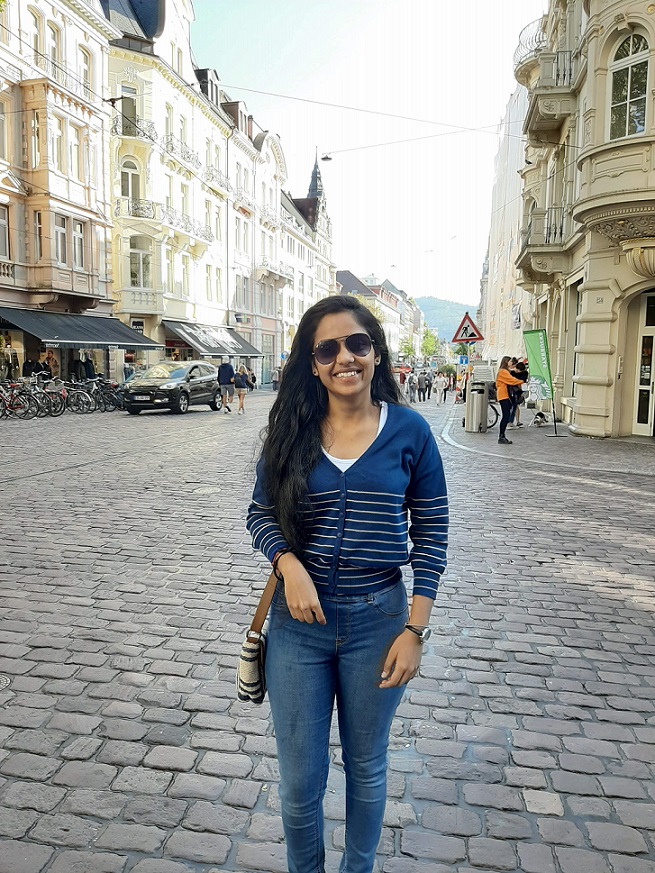 Charu Sharma is originally from Delhi, India. She completed her Bachelors degree in Chemistry with honors at University of Delhi (India). Subsequently she pursued her masters degree in Chemical Sciences at Indian Institute of Technology Delhi (IIT Delhi) with specialisation in Organic-Physical chemistry. Her masters thesis focussed on developing novel methods for synthesis of biologically active organic compounds employing Photoredox Catalysis. Now she is a PhD student at the Johannes Gutenberg University in Mainz (Germany). She is working on Autonomous and Dynamic feedback driven Self-assemblies in Bio-hybrid materials. 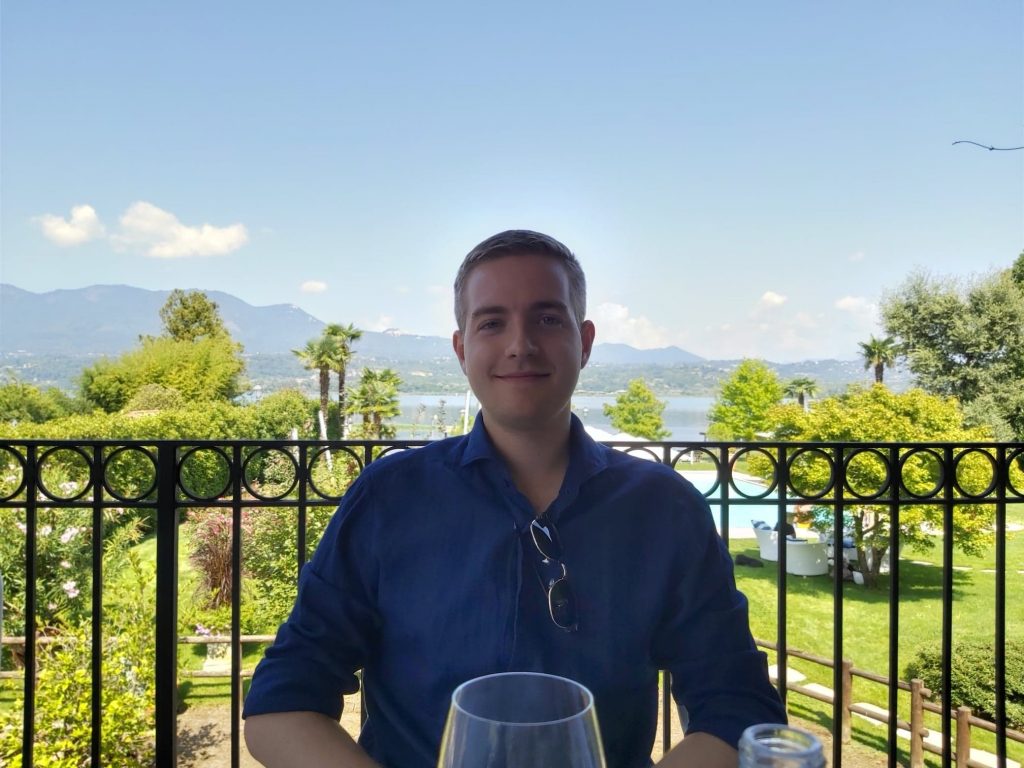 Giorgio Fusi is originally from Varese, Italy. He completed his Bachelors and Masters degree in Chemistry at Lancaster University in the UK, with a focus on supramolecular and materials chemistry. His Bachelors thesis focused on the synthesis of gold and platinum nanoparticles for the generation of metal-like liquid films, after which he undertook an EPSRC-funded project on the synthesis of mechanically chiral catenanes. His Masters thesis explored the microfluidic manufacture of microscale liquid crystal elastomer droplets as light-responsive actuators.
Giorgio is now a PhD student in the group of Prof. Andreas Walther, working on stimuli-responsive, adaptive and programmable hydrogel materials with a view to soft robotic applications. 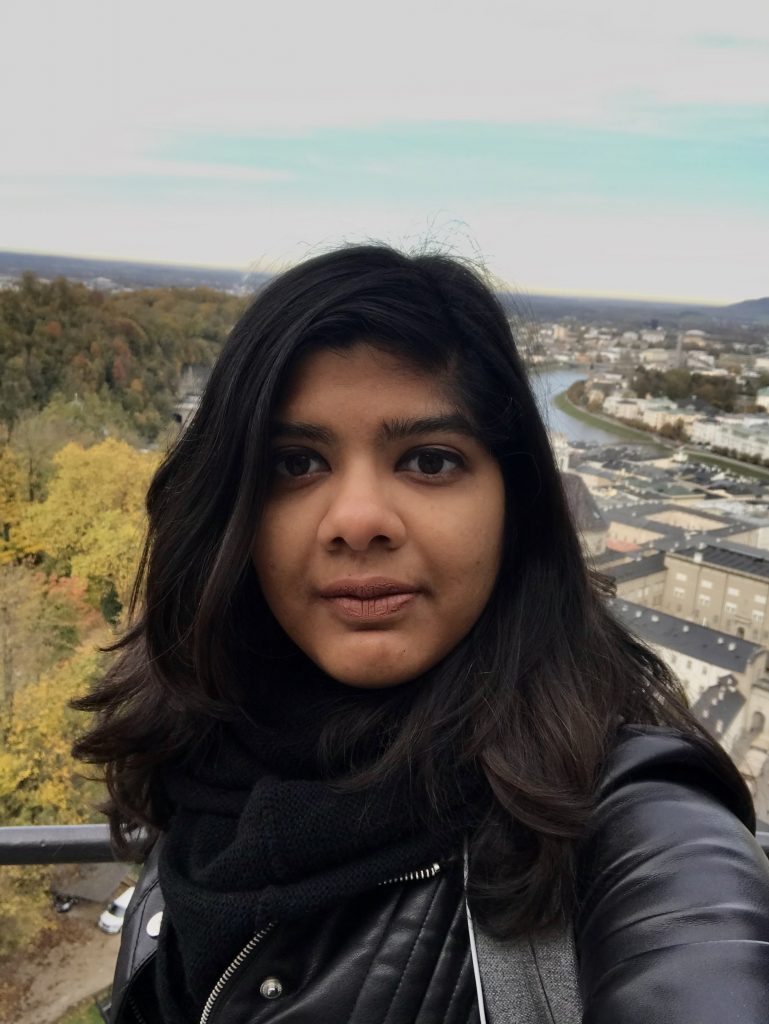 Lacey received a joint master’s degree through the Erasmus Mundus Masters in Nanoscience and Nanotechnology, specializing in Bio nanotechnology at the KU Leuven, Belgium and Universite Grenoble Alpes, France.  For her bachelor’s studies, she pursued a double major in Mathematics and Physics at the University of the West Indies, Trinidad and Tobago.  During her master’s study, the highly interdisciplinary focus of the program awakened a curiosity in biophysical techniques and in working on emerging technologies. She did her masters thesis work at the Laboratory of Micro and Nanotechnology for Health at CEA, Grenoble. There she used optical techniques to optimize the stability of an immunoassay as part of the development of a biosensor.  Currently she is a pursuing her PhD at NanoTemper Technologies as a Marie Curie Early Stage Researcher where she will work further on optical biophysical techniques geared towards signal amplification mechanisms as part of the Chemical Reaction Networks and Modelling Project. 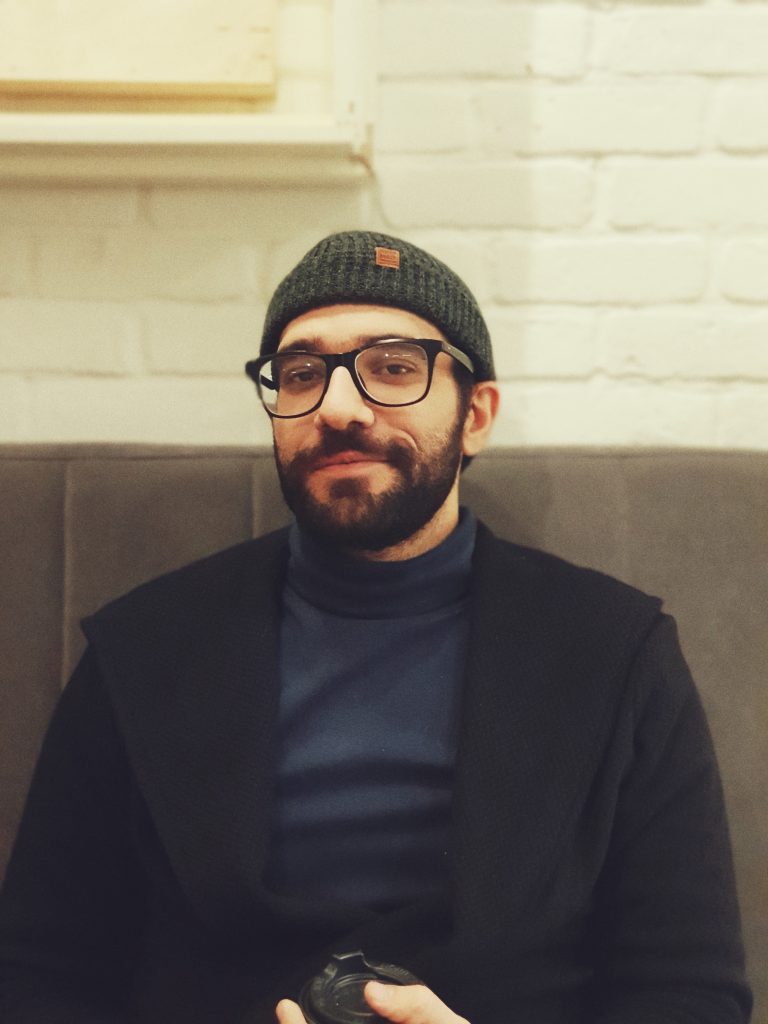 Ardeshir received his bachelor’s degree in Polymer Engineering from University of Tehran, during his bachelor’s studies he was engaged in research projects on PAO- and PAG-based synthetic oils and modification of polyurethane foams for oil spill cleanup. He attended a double-degree master’s program of polymer science at University of Strasbourg and University of Freiburg. During his time in Freiburg, he joined Prof. Dr. Andreas Walther’s group for a project on responsive hydrogel systems with tunable mechanical properties, after that he joined Fraunhofer ISE’s department of Organic Photovoltaic, writing his master’s thesis on improving Organic Solar Cells stability via in-situ cross-linking in the photoactive layer. In January 2020, he joined ASM group at TU Delft, pursuing a Ph.D. under the supervision of Prof.Dr. Jan van Esch. His project is to design and study a dissipative self-assembly system with feedback control.